The Emblem of the Chemists’ Club encompasses the history of chemistry and the processes, theoretical and applied, of scientific discovery in three powerful symbols: the benzene structural formula, the distillation retort, and the salamander. 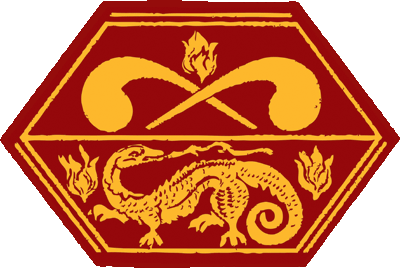 After the grand opening of the new Clubhouse in 1911, Morris Loeb and Chemists’ Club’s historian D. D. Berolzheimer created the emblem with the help of a commercial artist, H. Schumacher. They chose elements of the history and psyche of chemistry that would resonate with scientists then and in the years to come. The crossed retorts, tools of distillation, represent centuries of applied scientific exploration that frequently culminate in overarching discoveries such as the hexagonal benzene structural formula. That discovery, as well many others of the late 19th/early 20th centuries, enabled a rebirth and new appreciation of chemistry, envisioned by the fire-dwelling salamander of the Chemists’ Club emblem.

This element of the emblem, the heraldic salamander, does not possess a true physical counterpart since real salamanders do not breathe fire or survive in flames. Instead, this mythological salamander represents concepts like the spirit of fire, rebirth, or perhaps the new, stronger chemistry rising from the ashes of its alchemical past.

In choosing the mythological salamander symbol for a club largely concerned with new and innovative technologies, the Chemists’ Club founders made a connection between the past and the future. The next element of the emblem, the benzene structural formula, does homage to August Kekulé and the achievements of chemistry’s forerunners. In the words of Kekulé: We all stand on the shoulders of our predecessors; is it then surprising that we can see further than they?1 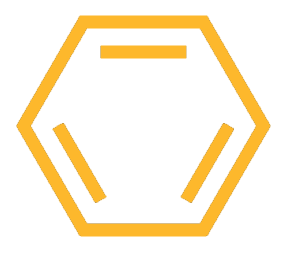 Making social and professional connections remains at the heart of Chemists’ Club motivation since its inception in 1898. Furthermore, in the early days of the Club and its building, the pursuit of intuitive scientific connections could be attempted in the laboratories available to members. Making connections was essentially what August Kekulé accomplished when he attached two ends of a carbon chain together to elucidate the structure of benzene—an idea that he claimed originated in a dream.1 Scientists later questioned the likelihood of such a dream, as well as Kekulé’s novelty in proposing a cyclic structure,2–4 but overall, his work delivered an enormous contribution to organic chemistry.

Kekulé‘s theories and experimental research, as well as the studies of his students, led to significant advances in the coal tar dye industry.5 Knowing the structure of benzene and its analogues allowed for predictions of chemical reactions much more powerful than alchemical empiricism. Collectively, Kekulé, his students, and friends synthesized azo compounds, indigo, and phenol, among many others.5 One of Kekulé‘s students, Nobel Prize-winner Adolf von Baeyer and later his student Werner Kleeberg experimented with phenol and formaldehyde polymers. These studies provided inspiration for Chemists‘ Club president Leo Baekeland‘s famous plastic Bakelite.6

Distillation apparatuses such as retorts and alembics exemplify chemistry and the science of separation since their first recorded usage thousands of years ago. The retort presages complicated setups for distilling alcohol, oxygen, coal tar products, and even isotopes.7 Coincidentally, distillation figured prominently in the research of one of the Chemists’ Club’s presidents, Donald Othmer. Othmer designed his own distillation apparatuses for determining the equilibrium compositions of vapors and gases.8 Distillation is also one of the unit operations in industrial chemistry, a term coined by Chemists’ Club member Arthur D. Little.7

Reflections on the Emblem

The Chemists’ Club Emblem encompasses the history of chemistry, from the vague and irreproducible procedures of alchemy to the rigorous experimental work that enabled discoveries like the structure of benzene. Alchemy was not a banned or persecuted profession but a legitimate pursuit, though it suffered from a lack of understanding of physical/chemical transformations and encouraged fantastical beliefs, like the transmutation of metals by heating and mixing.9 Alchemy left a lasting impression in popular belief and frequently appears in poetry.10 Concepts like the Four Elements still manifest in modern works, such as the salamander in Disney’s Frozen II.

What impressions of alchemy remained with the 19th century chemists who designed the emblem? Perhaps they read and agreed with Nietzsche, who said: Do you believe then that the sciences would ever have arisen and become great if there had not beforehand been magicians, alchemists, astrologers and wizards, who thirsted and hungered after abscondite* and forbidden powers? Forbidden powers indeed! The next century generated the splitting of the atom, transmutations of metals (finally, though on very small scale) and myriad scientific discoveries, of which creative aromatic molecules (tribute to Kekulé!) were but a few.11 Perhaps the early Chemists’ Club members meant to say that scientists, like the mythical salamander, live and breathe in the flames of empirical deductions, with some contribution from dreams.

* Abscondite: In trying to unravel a puzzle like the Chemists’ Club emblem, one necessarily encounters new ones. Nietzsche probably meant, by this word, secret materials or secret knowledge.